[Last Sunday] in Moscow, several dozen homosexual activists who were protesting a ban on a proposed gay-rights parade they would like to organize in the Russian capital "were kicked and punched by anti-gay demonstrators."

Homosexuality was illegal in Russia until 1993. 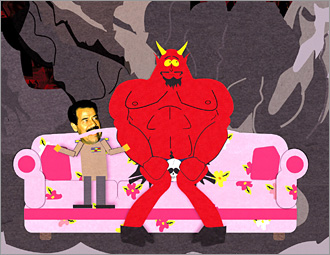 Neo-Nazis gathered to publicly protest the idea of any kind of gay-rights parade ever taking place in the city. The shaved-heads-and-tattoos crowd shouted "Glory to Russia!" and made salutes.

Russian Nazis. Ha! Do they betray themselves?

Richard Fairbrass, a gay member of the British pop-music group Right Said Fred who took part in [Sunday]'s march, "was punched in the face and kicked by anti-gay activists" while speaking to a reporter. Reuters notes: "Blood dripped from his face after the attack."

So sexy it hurts!

Yulia Volkova, of the Russian pop group Tatu, spoke at a press conference on Saturday in support of the proposed gay-rights parade.

From the looks of things, they're not gonna get it!