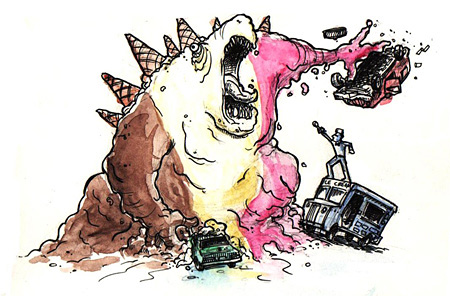 I saw a homeless woman begging for food and a blanket. On an island. In the middle of a busy street. With no room to pull over.

The pre-show "entertainment" before Knocked Up included a "first look" at the National Guard.

Seeing Cirque du Soleil in Vegas on 'shrooms? Way to plagiarize my life, Judd. To be fair, Wayne and I saw O instead of Mystère.

Seth Rogen and Jay Baruchel inspired me to research other Canadian Jews in popular culture.

Lo and behold, like half the cast of Degrassi is Jewish: Liberty, Paige, Craig, Ellie, Toby, Jimmy, Spinner.

Moreover, Spinner's been to Israel 15 times!

I discovered Blistex Complete Moisture in Chicago last year and adopted it as my official lip protectant.

My mother suggested switching to a balm designed for moisturizing cow teats and udders. The cow balm cured the rotting and itching and protects lips well, but it's not very portable, and when I apply it, I look like a slob, like a baby who didn't wipe his mouth while ingesting apple sauce.

Last week, I switched back to Complete Moisture and within days, my lips began rotting and itching again.

For you fans of the Iron Sheik self-destruction tour, he was on Derek & Romaine on the Sirius gay channel Out Q and was out of control calling everyone fags. [source]

Um… Why was he on the gay channel?

Indulge me as I play Live 105 ombudsman.

2. While you're at it, lock "Rock Superstar" by Cypress Hill back up too.

3. The Beastie Boys songs you play don't all have to be off License to Ill. They've recorded other (better) albums, you know.

4. Less Nirvana. Please. I implore you. I hear a Nirvana song like once every hour! Once a day during "90s at Noon" is enough.