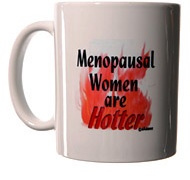 According the supposedly "reputable" publication, The New York Times, it's so hot to be menopausal. For the record, coming from a living, breathing, non-gay male, this is totally not true. Unless you're talking hotter like hot flashes hotter, in which case, yes, I guess menopausal women are technically hotter. But it's not like that makes me care about the old hags. Ha ha, sorry mom!

The three were chatting when Ms. Caruana, who is in menopause, suddenly blurted out, "I'm having a hot flash."

The conversation lurched to a halt, followed by uneasy chuckling.

Ms. Caruana, though, was unashamed. "Why hide it?" she said later of the episode, which occurred in March. "I kind of call my menopause my 'red badge of courage.'"

Oh, that's funny, considering that's the only red thing about your body these days, if you know what I'm saying. Now, it's not that I particularly have anything against menopausal women, just like I don't really have anything against fat people (this is kind of a lie, but whatever), it's just that I'm trying to set the record straight here. I'm sure many fat people are perfectly fine human beings, but that doesn't mean they're hot, and when they think they are and go lumbering around with their sixteen ass cheeks cascading out of a pair of ill-fitting shorts, somebody has just got to do something. So, uh, basically I guess I'm trying to say that the same goes for menopausal women. You're not hot, so… um… stop thinking that for whatever reason you suddenly are.

PS: Sorry for that period joke up there, guys.