My best friends in college are getting married — to each other — and I'm not sure what to gift them, nor how much to spend on my gift.

They set up a honeymoon cruise registry, but c'mon… I'd fund terrorists before I fund a bloody cruise. 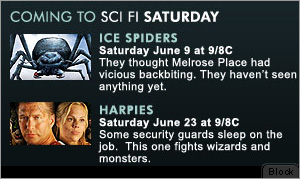 "Sci-Fi Originals" from the past several years:

Press release quote of the week:

Jamie Roberts, GSN's Senior Vice President of Programming said, "Getting Dennis Miller to be our host on GRAND SLAM is the game show equivalent of landing the #1 draft pick."