To illustrate how out of the loop I am, I wasn't aware of Pinkberry at all until my recent trip down south.

Elizabeth: "I thought you'd be familiar with the [burgeoning] chain because Asians love it."

Apparently, Asians love overpriced "frozen yogurt" with toppings that skew healthy. I use quotation marks because the base is not frozen yogurt by definition. It tastes like Asian yogurt drinks though.

The service staff at the Pinkberry in Westwood fill cups with the mysterious soft serve in such a way that little room is left for toppings. I received like five cubes each of strawberry and kiwi and a teaspoon of granola.

By all accounts, Fogo de Chão is THE restaurant for birthday dinners.

I saw a man wandering about the Santa Monica Farmers' Market with a McDonald's beverage cup in hand.

I saw another man in the Santa Monica Public Library wearing a gas mask.

From the country that fused Pepsi and cucumber: 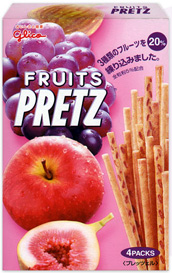 I bought a box at an Indonesian market. They taste…odd.

You know The Landmark in West Los Angeles is fancy multiplex because its concession stand sells Pocky and Coca-Cola BlaK.

Its 4k digital projectors and "living room" auditoriums with reserved couches aren't too shabby either.