Police are looking for two men who reportedly threw a can of energy drink at a gas station clerk, striking him in the face, then made off with a box of condoms. [source]

So robbery is okay, but unprotected sex isn't?

The view from the balcony of the apartment I crashed at in Los Angeles: 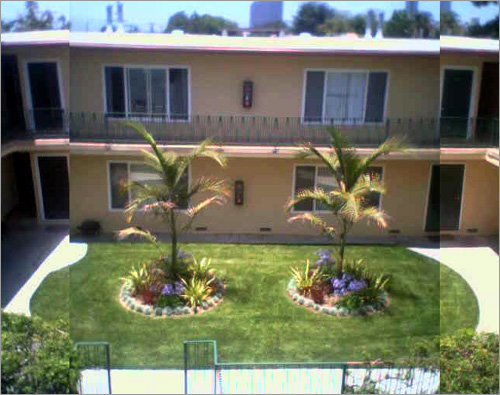 The trunk of my car currently contains over 100 cans of cola.

We all have our vices. Mine just happens to be on sale this week.

"Oh this is great. The cat has tits."
— a chap sitting behind me as Cinemark's introduction video, which computer-
animates the company's feline mascot and a female counterpart, began rolling.

Josh:
dude zach my friend jesse and i are wondering if we should feel bad that the cat is hot
everytime i see it i stare down its dress
and i feel all dirty

At work yesterday, I had to send a package to Ireland. The recipient provided the following address:

No numbers, no postal code… The simplicity blows my mind.

The actor who played the new gay on the block in the fifth season of Degrassi: The Next Generation has his own Wikipedia page.

That is, Simon Adebisi, Adewale Akinnuoye-Agbaje's notorious character on Oz.