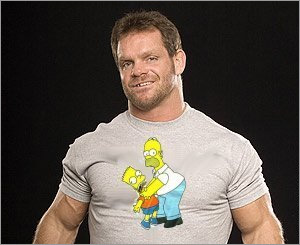 Guitar Hero III announced "Number of the Beast" by Iron Maiden and "Through the Fire and Flames" by DragonForce as playable songs.

Rock Band should counter with The Mars Volta.

Men's magazines sure like photographing Food Network talent with sauces.

I bought my first pair of shoes in almost three years.

They are the second pair of blue shoes I've purchased as an adult.

Things that irritate me:
— packing peanuts
— paying for chips and salsa at Chili's
— people who drive sports cars at or below speed limit

I saw a truck on 101 with a large American flag on its rear window above the words "FEAR THIS."

Ah… A jingoist and a Dragon Ball Z fan!

If you ever want to extract information from me, lock me in a room and blast "Prayer of the Refugee" by Rise Against on repeat.

• Movierules #16: Song Titles
• The PlayStation Controller Transformer
• Guess which "Home Improvement" star married a woman almost twice his age at 17, started a vegan cuisine company, and is now getting divorced due his wife batting for the other team?