I headed up to the city on Saturday to see Charlie Bartlett.

Ah… Summer in the city… Bring a jacket!

I normally wouldn't bother with the two-hour round-trip commute, but IMDb listed four Degrassi: The Next Generation actors in the cast.

Anton Yelchin plays the title character and, according to the message board on his IMDb page, is "the proud of Russia."

Seeing a copy of Youth in Revolt on Charlie's nightstand gave me a T.E.

On my way to the theatre, I passed a "Salvadorean Mexican Food" restaurant and saw an elderly man eating inside with an opened jar of mayonnaise beside his plate.

"Did he bring a jar of mayonnaise to the restaurant?" I wondered.

My first year at university, I lived next door to an Aussie who would bring a jar of Vegemite with him to every meal. He used Vegemite like it was Sriracha.

I also passed by a taqueria and saw a Chipotle employee eating inside.

Outside the theatre, I spied with my little eye (heh): 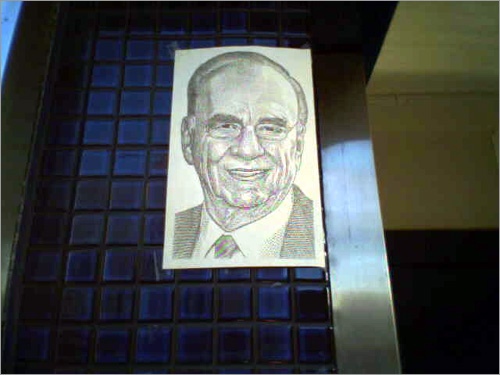