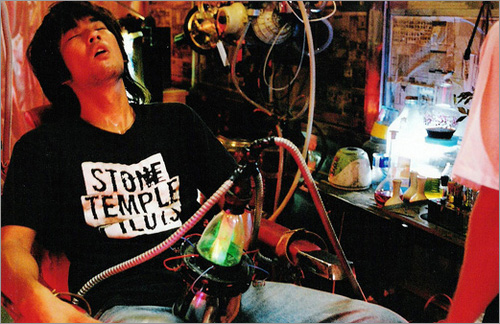 Glenn Murphy, the newly elected leader of the Young Republican National Federation, has been forced to step down amid allegations that he sexually assaulted another man after a Young Republicans party.

The victim's sister had urged both men to spend the night at her home because of the amount of alcohol the two had consumed during the party.

The victim awoke in the morning to find Murphy performing oral sex on him. When the victim asked Murphy what he was doing, he responded: "He was holding his dick with one hand and sucking my dick with his mouth." [source]

"Whoa! The fuck are you doing?"

"Let me get this straight. You want to pay me to fellate me?"

"I didn't offer to blow the guy because he's a dude and I'm gay. I did it because he's black and I was scared of him." [source]

You know, if the Republican Party could just accept homosexuals, members wouldn't have to go to such lengths for a fix of dong.

Who will be Republican Cocksucker's Mr. September 2007?