Fans who tolerate the repetitiveness and ideological bankruptcy of the "Rush Hour" franchise may be testaments to the power of hope and a need for familiarity at a time when the Iraq war continues unabated, pensions and polar ice disappear, and Al Qaeda videos enjoy wider distribution than Sundance winners. [source]

Or they may be bored teenagers.

On The Tonight Show, Jay half-heartedly showed off a new desk. Admitting he didn't see what was wrong with the old one, Leno quipped: "It's not like NBC to get rid of something that's worked perfectly well for 15 years." [source]

Drudge couldn't decide on one.

Once at a party, Condoleezza Rice kicked off her shoes and started dancing. Wanting to show his partner how firm Rice's behind was, Blacker postulated that if he aimed a quarter at her butt, it would bounce right off like a rocket.

"He was right," says Kessler. "[Rice] didn't realize what he had done until everyone was laughing hysterically. She was flattered and proud." [source] 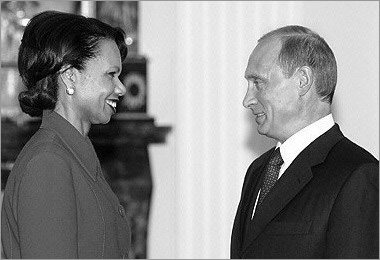 When Drew Carey asked her about being scrutinized by viewers, she said, "Honestly, I don't know what 'scrutinized' means."

The $100,000 question was about pit bull ownership, and after Carey joked about Michael Vick, Amber emphatically declared, "I like Michael Vick."

After guessing the number of people who think pit bulls shouldn't be kept as pets, she pleaded, "Please, God, please," and started crying. [source]

WWE Unforgiven could be one sad ass pay per view.

Yes folks, Gene Snitsky, King Mabel, and The Great Khali are in world title matches in one ppv

All that's missing is Spurs/Cavaliers.

• Is This the Monster from J.J. Abrams' 'Cloverfield'?