The planned cover for our 2007 retrospec-disc: 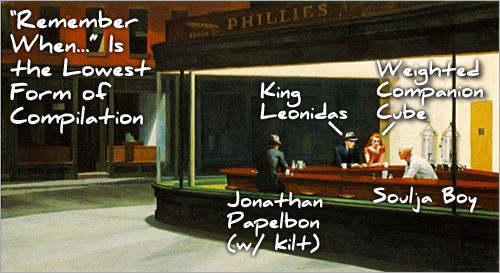 The title is a play on the line "'Remember when…' is the lowest form of conversation" from the final season of The Sopranos.

I wanted to pair the title with Rockwellian art and settled on contemporizing Edward Hopper's "Nighthawks."

I planned to present the track listing as either jukebox listings or a diner menu. I considered splitting the "menu" into sections (skits, British acts, white rappers, et al) and replacing prices with track numbers.