What I don't dig is the people who make a trip out of coming to [Costco] with their families in tow seemingly only to snack. Is it just me or are old people the worst at vulturing the demos? The depression is over, people – grab a cup of yogurt squares and keep moving. [source]

Today. 2:30 p.m. PST. Fox Sports Net. A grudge match which originated on this day last year and escalated this past weekend.

And I'll be at work.

WWE is now working with Second Wind Dreams, a group similar to Make-a-Wish, but for the elderly.

An 82-year-old woman will get to meet Shawn Michaels and HHH at a house show in Fayetteville. [source]

An 82-year-old woman's one and only wish is to meet D-Generation X. 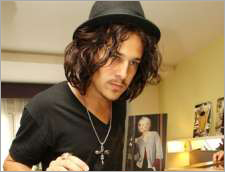 I googled "David Archuleta Salt Lake Tribune" and stumbled upon this comment:

These are the kind of latinos we need here. Period.

"The NBA's presence would increase Oklahoma City's crime rate and drag down the city."

"We don't want the NBA, with its image problems, fatherless children, egomaniacs and shootings. No thanks."

"They are a very visible example of gangster dress, guns, extramarrital [sic] babies……….."

They're called "flyover states" for a reason.

• Stream The Dana Carvey Show on Hulu
in case you didn't record every episode that aired and edit them onto a single videocassette like I did.