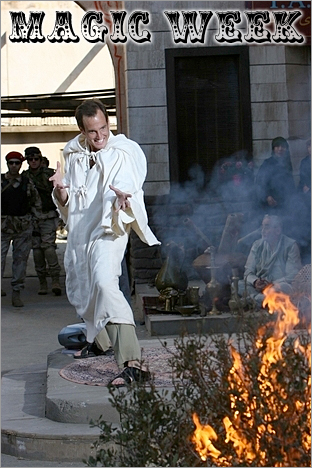 It was either magic or Brett Favre.

"Over the weekend, I saw this magician on Comedy Central swig Windex from the bottle. It looked cool… Let me see the script."

The night before the shoot, I emptied a bottle of Windex and spent approximately 30 minutes sanitizing it. Lather, scrub, rinse, repeat.

Fuck. I can't get rid of the chemical smell.

I filled the Windex bottle with water, tinted the water with blue food colouring and screwed on a cap from an unused Amway spray bottle.

Ryan unscrewed the cap, drew the bottle toward his mouth and winced.

"Dude, it reeks of Windex!"
"It should be benign, though. I cleaned the bottle thoroughly."
"With what? Windex?"
"Give me the bottle."

I might as well drink actual Windex. This can't be good for my body.

Says a guy who once ate 40 Chicken McNuggets in one sitting on a dare.

I chugged half the bottle.

…until later that day.