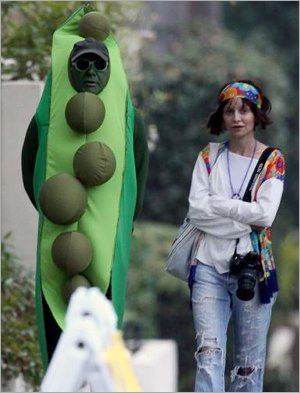 I cannot find a photo that adequately illustrates how fat Goldust has become.

I really hope Quinn isn't The Skinner. Those who don't learn from Nip/Tuck…

Comedy sketch idea: A woman uses Just For Men Haircolor and turns into, like, The Fly or Godzilla.

» The liner notes for David Archuleta's debut album include a Thank You to Jason Mraz. He enjoyed a Mraz concert on Saturday with Jason Castro.
David Archuleta……….two stoners.

» On Halloween, Fall Out Boy set the Guinness World Record for the Most Interviews on Radio in a 24 Hour Period by a Pair of Two.

Every week, I hear about at least one ridiculous new world record. Most People in a Custard Pie Fight. Biggest Weezer Logo Made of Nachos.

Guinness needs to be more discriminating. Stop encouraging and validating attention-mongers and people who try too hard.

I can pull a world record out of my ass too!

Most Wipes with a Kraft Single During a Bowel Movement. Four. NEW GUINNESS WORLD RECORD!