» Whenever I see this ad:

I wonder why the children are wearing catsuits.

» I caught a bit of Little Man on television. The little man's computer-generated head looks terrible.

» I highly recommend BOB's Revolution stroller. It's the best stroller I've ever pushed.

» Peter Farrelly (of the Farrelly Brothers) wears The Shirt in a Sprint ad slash reminder to silence your phone during a movie.

» I'm considering getting rid of my mobile. I rarely use it. It's normally dead weight. I'm not sure I can get by nowadays without a phone, though.

» Sci-fi story idea: A man discovers that he can speed up the sun's orbit and thus speed up time. Advancing time, however, also advances death, and he can't rewind time.

» Dan and Andrew may be the least fun frat boys ever.

» Randy the wedding photographer may be the least fun human being ever.

» None of the white people I know like soon tofu. I need to befriend some Koreans. 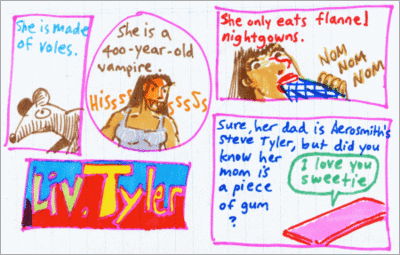