A former dairy boss in China's scandal over tainted milk blamed for the deaths of at least six babies and illnesses of nearly 300,000 others has pleaded guilty to charges that could lead to the death penalty.

Tian Wenhua admitted that she knew of problems with her company's products for months before informing authorities. [source]

Does she deserve to die?

Yes. At least six babies died and 300,000 became ill due to her irresponsibility.

No. If we killed all irresponsible business executives… Besides, only six or so babies died in a country of 1.34 billion.

If six babies are negligible, however, then so is one woman.

Last year, China executed the head of its Food and Drug Administration for taking bribes to approve untested medicine.

In most cases, court police execute prisoners by shooting them in the back of the head. [source] 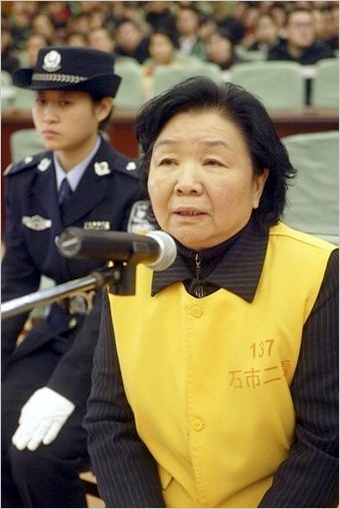 All day I've been picturing police shooting this woman in the back of her head.

It seems so…unnecessary, but what good would imprisoning her do?

Where the tragic cat films at?

What if Apollonia didn't die in The Godfather?