Did you know Gabrielle Carteris turned 48 this month? Forty-eight! Barack Obama doesn't turn 48 until August. An original 90210 cast member is older than our president. [source]

Both sound like Saturday Night Live sketches. I dug the one episode of John Mayer Has a TV Show that aired on VH1, though.

Meanwhile: Brian McKnight will be a contestant on The Celebrity Apprentice 2.

"If ever I believe my career is through, then I'll star on Celebrity Apprentice 2!"

This week in Belaboured Criticism by Toby Young:

I'm not that cruel.

At Subway today, the man behind me ordered a tuna salad salad. Like, a salad with scoops of tuna salad on top.

In Vegas, my boss dragged me to Lawry's.

I liked the bread…

I'm not a vegetarian by any means, but I would rather a woman menstruate in my mouth than eat prime rib. 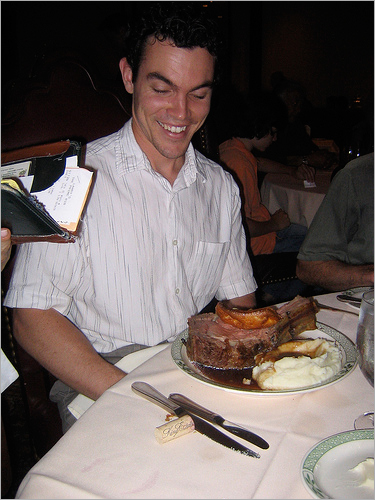 LOOK AT THIS CUT