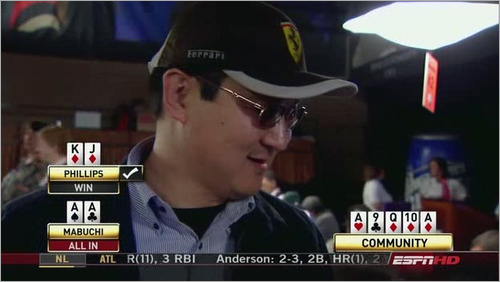 Poker in HD is why people hate America.

I did not know that Women's Tournament bracket pools existed.

Heh. The winner of ESPN's Men's Tournament pool receives more money than the winner of the Women's pool.

Disney is negotiating to take an equity stake in Hulu. In exchange, Disney would provide episodes of ABC shows. [source]

This deal boils down to how much Hulu wants to add Lost, because you can watch Lost via ABC's web site either way, and ABC's HD Streaming looks sharper than Hulu's 480p Hi-Res.

Meanwhile, The Big Bang Theory continues to hold out on full episode streaming of any kind.

You would think a show about nerds would be readily available to nerds.

The Big Bang Theory is MTV and CBS.com is Canada prior to 2001.

I saw an ad for 12 Rounds that blurbed a few critics.

The new inspirational dating competition series MORE TO LOVE follows a guy with a big waist as he romances several plus-size women. [source]

I liked it better when it was the sitcom Babes.