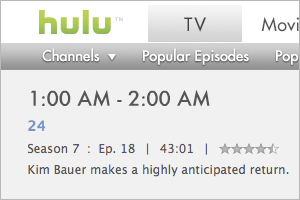 After Monday's episode, I can't see how Tony returns next season, but Jack killing Tony (again) would leave a bitter taste.

Television thrives on familiar characters, and the few who remain on 24 keep dwindling.

Mia Kirshner could reprise her role as Mandy. That is, if she's not too preoccupied with documenting oppression.

With two episodes left, Chuck will reportedly end its season with a big game-changer that essentially re-designs the show for next season.

I'm guessing either Morgan or Ellie dies, but Josh Schwartz greenlighted Marissa's death on The OC, so maybe Sarah or Casey dies?

The writers wouldn't, would they?