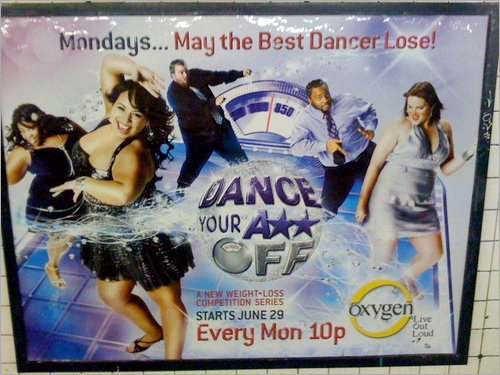 I saw an ad for this new show "Dance Your Ass Off". Let me get this straight…it's a bunch of fat people dancing like idiots? INSTANT TIVO. [source]

I discovered that I Didn't Know I Was Pregnant is now a series on Discovery Health.

The episode descriptions are gold:

A fast food manager goes to the bathroom at work with what she assumes is the flu and ends up giving birth in the toilet! Strangely, the woman has had three other children.

When a 19-year-old coed wakes in the middle of the night with debilitating stomach cramps, she makes a shocking discovery. Will her roommate be able to save her baby?

Erin thinks she's gained the Freshman 15 but when she is rushed to the Emergency Room, the diagnosis is terrifying.

She's rushed to an emergency room over the Freshman 15?

Sbarro is reportedly a restaurant on the ropes.

My advice: Stop charging so much for baked ziti! It's a small bowl of pasta, cheese and tomato sauce, not a sandwich at Panera!

I watched an episode of Molto Mario in which he lines a large mixing bowl with dough; layers rigatoni with white sauce, meatballs, and rigatoni with red sauce inside; puts the bowl in an oven; and flips it over before serving, creating a baked pasta dome.

"This is party food in Italy?" I thought.

The creators of This Is Why You're Fat netted a book deal less than two months after launching the photoblog.

Seeing as how publishers will turn any quasi-popular web site into a coffee table book nowadays – Stuff White People Like, Hot Chicks with Douchebags, I Can Has Cheezburger – I'm keen on scoring a deal too.

I just need a marketable premise.

• The Sudden Rise and Thunderous Fall of Dave Matthews Band