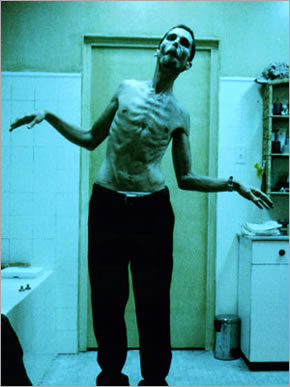 "The dogs were defenseless! Michael Vick was cruel to defenseless animals!"

Suppose Vick's dogs gang-raped his children; dissolved their limbs alive in sulfuric acid; and hung his mother by a noose off one side of a burning cross.

Would public reaction be different?

"Puppies are not capable of such barbarity."

People assumed the same about the BTK Killer.

» The producer of Transformers and G.I. Joe plans to re-make Sympathy for Mr. Vengeance.

» I like to run with my back to the sun because the shadow I cast – it looks like my forearms were amputated.

» Would you rather be forced to breathe through only your nose or only your mouth?

» Pizza Hut re-branded as "The Hut." Radio Shack is re-branding as "The Shack."
Bed, Bath and Beyond Step into…The Beyond!

» ManBearPig is a valid item in Scribblenauts.

» What, exactly, is the power of leather?

» I hate when what I think is an open parking space is actually occupied by a small car or a motorcycle.

» I should've gotten in on the ground floor of bouncy castles.