» My $100 bet on Michigan State to win The Tournament is looking prittay, prittay good. 30 to 1 odds. [slaps desk Wojo-style]

» Leading a pool with a single bracket is no more impressive than leading with one of multiple brackets. A pound of feathers, a pound of gold.

» Idea: Busted Bracket Challenge. Win money for missing all 64 winners, like you do playing 20-spot keno.

» Drink tanks – Coke Zero solicited "ways to advance the NCAA fan experience"; Pepsi is soliciting "ideas that move the world forward." And this sells pop how?

"We couldn't get Tom Cruise."

Bobby Fong lives on campus and is known to many students as "BoFo." [source] 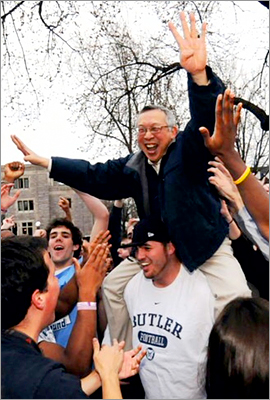 » By my count, Vitale clasps his hands 59 times. It's like he's playing a light gun shooter where you clasp your hands to reload. What a strange default position.

• a brawl over a cheeseburger at a Texas Whataburger, which includes a rotund man yelling "Fuck you and your cheeseburger!" and losing his gym shorts during a tackle
• The Difference between Nerd, Dork, and Geek Explained by a Venn Diagram
• A Pop-Culture History of the Jacuzzi