"Conscience off, dick on, and everything's gonna be alright."
– Mr. Han 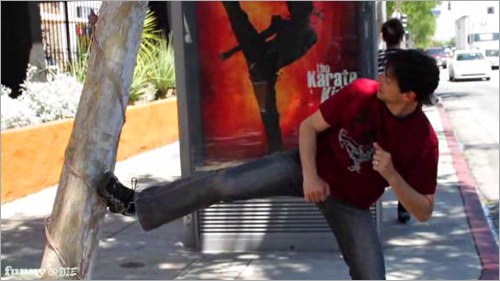 Entertainment Weekly: Who would have thought The Karate Kid would be the summer box office savior?

Who thought it wouldn't be?

I wonder if his scenes were cut for time or if his character is just a non-starter. He oddly and unceremoniously becomes an intermittent extra.

Justin Bieber – "Never Say Never (feat. Jaden Smith)" is eligible for a "best original song" Oscar. Would the Academy nominate (if not honour) him for television ratings?

I dug the use of Gorillaz – "Dirty Harry" (Schtung Chinese New Year Remix)."

RE: South Africans and vuvuzelas

You have to admire their tenacity.

If a soccer game is tied after 85 minutes, the field should begin shrinking a la Bomberman. We have the technology.

• Reviewing 'The Karate Kid' Remake with My Hardass Asian Mom
• Chatroulette Enlists Napster Founder In Fight Against Masturbators
• "Just How Badly Has The Internet F'd Up Your Brain?" test