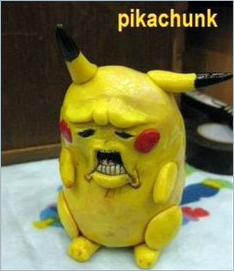 The TLC references audibly confused the pre-teens sitting behind me.

To be fair, I don't understand Fred. I cannot believe that Nickelodeon passed on Adventure Time (twice!) for…Fred: The Movie.

Some poor CTV interns are tweeting as the characters on Degrassi.

I caught the end of what appeared to be a television ad for replacement knees on Food Network. "Ask your surgeon if they're right for you!"

"Our choices for governor are Meg Whitman and Jerry Brown? How uninspiring. I won't blame young people for not voting in November."

"What is Cody short for?"
"What?"
"The name. What is the formal version of the name Cody?"
"I dunno… Codrick? I think it's just Cody. Why?"
"It's a very kiddie, youthful name that is incongruous with adulthood. It doesn't command respect. Cody Webster Sr. – that sounds odd. A Bobby can switch to Bob or Robert, but a Cody, I guess, is forever Cody."

I'm in wait-and-see mode on Ol' Dirty Bastard's son performing Enter the 36 Chambers with the Wu-Tang Clan at Rock the Bells. It's like Paul and Ringo performing Sgt. Pepper's with Julian Lennon and Dhani Harrison.

Weezer's next LP Hurley will reportedly channel '60s pop. The band collaborated with Ryan Adams! and Mac Davis, who penned Elvis Presley's "In the Ghetto."

There's also "Smart Girls," Cuomo's ode to all the girls that proposition on him on Twitter, which [he] compares to "Back in the U.S.S.R."