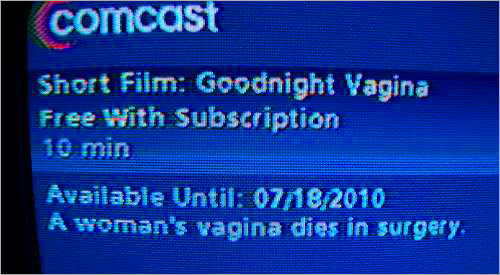 Essential Killing
Vincent Gallo plays a fugitive Taliban soldier in Europe who "must use his wits to evade his pursuers whilst battling bitter winter cold and lack of food."

The Whistleblower
Rachel Weisz plays a Nebraska cop on the trail of a sex-slave ring in Bosnia.

Marimbas From Hell
Don Alfonso loses his job playing the marimba at a hotel in Guatemala City. He approaches musician Blacko and proposes that they fuse the sound of the marimba with heavy metal.

I'm Still Here
Follow Joaquin Phoenix as he announces his retirement from acting in the fall of 2008 and sets off to reinvent himself as a hip hop artist.

The Genesis Code
A college hockey player and a female journalism student struggle to reconcile modern science with the opening verses of Genesis. Could it be that both are true?

The Genesis Code was co-directed by C. Thomas Howell and the director of Angus.