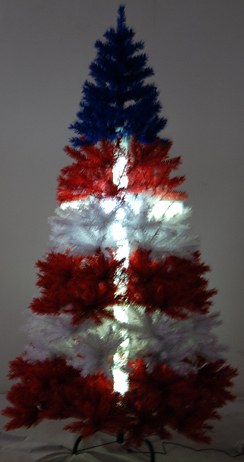 The Christian Nation, CHRIST-mas Tree (Display all year around)

It is a form of cultural ignorance to believe that at some point or other, we were more in charge and that our government was somehow more transparent in the past. Societies declining into obsolescence understandably resist looking forward, and hang onto their past mythologies. Consequently, both liberals and conservatives in America feed on myths of political action which died in Vietnam. The results are ludicrous. Tea Partiers attempt to emulate the 1960s protest gatherings by staging rallies sponsored by the richest beneficiaries of the status quo. For the average TP participant, the goal, near as I can tell, is to "start a new American Revolution," by wearing foodstuffs, screaming, threatening, and voting for nitwits. Media pundits proclaim the Tea Party "a historic populist movement."

Neither populist, nor authentic movement, the Tea Party may yet prove historic, however, by seriously fucking things up more than they already are. Spun entirely from manufactured spectacle (and thus void of cohesive political philosophy or internal logic), the Tea Party lurches across the political landscape bellowing at the cameras and collecting the victims of cultural ignorance in sort of a medieval idiots crusade. But to the American public, seeing the Tea Party on television is proof enough of relevancy and significance. After all, stuff doesn't get on TV unless it's important.

Progressives also fancy a revolution, one in which they participate through the Internet petitions, and media events such as the risk free Jon Stewart Rally to Restore Sanity, where no one risked even missing an episode of Tremaine. Seeing people like themselves on television was proof fighting the good fight. The Stewart rally was nonetheless culturally historic; we will never see a larger public display of post modern irony congratulating itself.

• America: Why R Your Peeps So Dum?