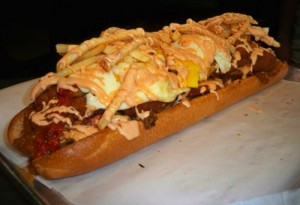 —Where is Fat Sal's?
—It replaced Buck Fiddy. Turtle on Entourage is one its owners.
—G_d, I haven't return-visited Los Angeles in eons.
—You should move back.
—Heh. I've considered it.

—This Big Fat Fatty sandwich doesn't seem as absurd as

—Length vs. girth.
—I dunno… The Fatty looks comparably girthy. 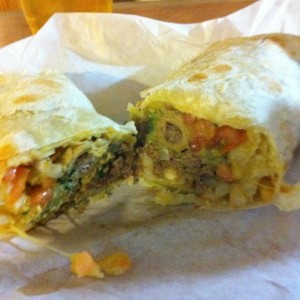 —Burducken.
—Burdilla.
—What does the quesadilla add, besides more cheese? 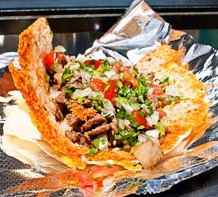 16. UT-San Antonio: La Costra Del Guero
The cooks at Chela's Taco's taco truck make a white cheese fondue and then fry it into a crisp shell – basically a hard tortilla made completely out of cheese. It's stuffed with carne asada, fresh salsa and cilantro.

—A cheese shell – ingenious.
—And no redundant cheese filling. 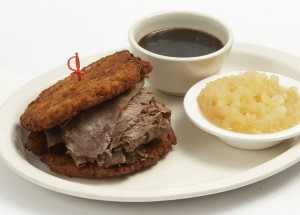 —Pinch me. A Jewish Double Down?! [drools]

• How Kickstarter Became a Lab for Daring Prototypes and Ingenious Products
"Arrested Development star David Cross was an early investor."