Previously on Adam Riff™:
21st century mixtape. Our favourite songs. One per year.

I thought it might be fun to do the same exercise with films.

Our favourite films of the 21st century. One per year. 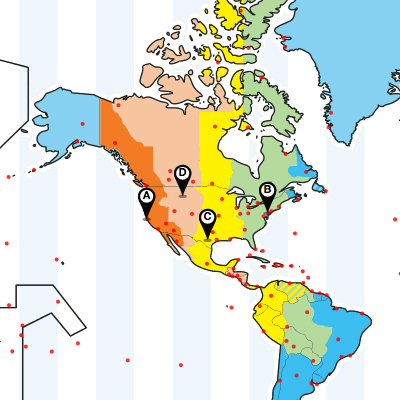 The Participants
A. Me
B. Drew, who is a professional film critic
C. Steven, who runs a film website
D. Adam Robot, who gives this exercise someone native to each direction and time zone of America

Drew: American Psycho
Nearly picked Almost Famous because it was the movie that made teenage me want to be a writer. But Bateman has slightly more staying power, overriding nostalgia…and of course it's a better movie overall. It's one of those "comes up multiple times a week" movies.

Steven: Memento [world premiere]
Do I lie to myself to be happy? Yes.

Jon: Chicken Run
I published a list of my favourite films of 2000 on this website in December 2000 — 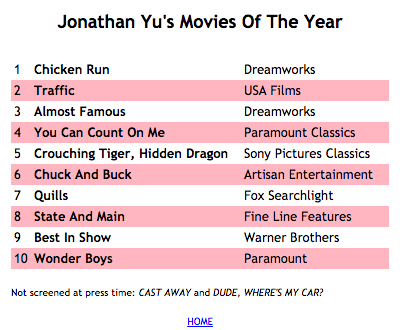 Drew: The Devil's Backbone
When people want to talk about movies that make them cry, this is always the one I bring up.

Steven: Bully + In the Bedroom
This was a tie 'cause I think Nick Stahl was incredible in both of these films. First time I heard of Tom Wilkinson and I've kept up ever since.

Jon: The Royal Tenenbaums
To me, Wes Anderson "made the leap" with this film. He has not reached its height since.

Drew: Adaptation
Saw it at the Bala Theatre, a really cool, sadly closed historic cinema just outside Philly, when I was a freshman in college. I start thinking about ghost orchids every time I'm in that part of town.

Steven: Sympathy for Mr. Vengeance
I felt for both main characters. This is the only movie I'd ever want to remake if I could. I'd want Tom Cruise as the dad.

Jon: The Believer
I love films about Nazis or neo-Nazis, and I adore this one. I'm probably the only person who owns a copy of its accompanying book, The Believer: Confronting Jewish Self-Hatred.

Drew: Kill Bill: Vol. 1
This is my favorite movie so had to pick it for '03, which is tough since so many other of my favorites came out this year, too…Beat Takeshi's Zatoichi, American Splendor, Shattered Glass…

Steven: City of God [theatrical release]
I knew I was seeing something great when they show the kid crying as they want him to shoot his buddy.

Jon: [The] School of Rock
Feel good movie of the aughts.

Drew: Shaun of the Dead
Another tough year, since I love both The Incredibles and Eternal Sunshine as well…had to go Shaun, though. I say "you got red on you" to people all the time.

Steven: Undertow
The best dialogue I heard all year.

Adam: Shaun of the Dead + Primer
You'll have to deal with 2004 having two.

Jon: Primer
Shane Carruth took from his surroundings what was needed and made of it something more – mind-bogglingly more.

Drew: A History of Violence
Is this an overrated, underrated or just-right-rated movie? Me, I'd vote for underrated.

Steven: C.R.A.Z.Y.
I have two films that are interchangeable as my favorite film of all time. This is one of them. The dynamics of the mom and her maybe gay son are what get me.

Adam: A History of Violence

Jon: Oldboy [theatrical release]
While Steven was visiting me in Los Angeles, we rented this film on Adam Robot's recommendation, watched it, and then immediately returned to Cinefile to rent another Park Chan-wook film (Sympathy for Mr. Vengeance), so impressed were we.

Drew: Children of Men
Could be for cinematography alone but it's also a great/super-depressing movie.

Steven: The Departed
I didn't think Martin Scorcese could remake a great film into something better. He did. Dropkick Murphys in the scene where they are driving was on point.

Jon: The Descent
This is the last film (and one of only a few films*) to genuinely scare me. To this day, I am uncomfortable driving behind a motor vehicle bearing poles or similar objects on its roof.

Drew: Sunshine
One of the best casts. There Will Be Blood seemed like a strong contender here too, but I consider Sunshine one of my favorite movies pound for pound, sci-fi or otherwise.

Steven: There Will Be Blood
10 minutes into the film, no dialogue. Incredible acting. I'm your brother…from another mother.

Adam: There Will Be Blood

Jon: This Is England
Came for the neo-Nazis, stayed for its (and its two made-for-television sequels') staggering sense of place. I want to live in Shane Meadows' England.

Drew: WALL•E
Another movie that comes up in my life multiple times a week, mostly in reference to humongous people I see in the mall or airport lost in their phones/drinking Slurpees/both.

Jon: Hunger
This film floored me. It's a masterpiece in all facets.

Drew: A Serious Man
It's not the Coens' best movie, but I think it's their most original, and it has a really unique sense of time and place.

Steven: A Single Man
My other favorite film of all time. Both involve gay main characters.

Steven: The Social Network
This is gonna sound stupid, but I loved this movie for the very end. Just him refreshing the friend request.

Jon: Four Lions
Truly a film like no other. You can't not admire its audacity.

Drew: Hanna
Tricky because I love Attack the Block and Martha Marcy May Marlene from this year pretty much equally…but Hanna is just so damn cool. One of those movies I still get excited about when I see it pop up on TV even though I've watched it a million times.

Jon: Michael
It's difficult to sell people on a film about a paedophile who holds a 10-year-old boy captive in his home, but imagine if Vince Gilligan made it. EH?

Drew: The Raid: Redemption
What else?!

Steven: Beasts of the Southern Wild
Great soundtrack, great little girl. Great film. This is what Where the Wild Things Are should have been.

Jon: The Imposter
> The Jinx.

Drew: Inside Llewyn Davis
I just love how it looks, feels and sounds. And the supporting cast is incredible.

Steven: Zero Charisma
Doesn't pull any punches. No happy ending. It's exactly how it is to be an outcast.

Adam: Under the Skin

Jon: Tim's Vermeer
An absorbing record of a triumph of the will.

Drew: Only Lovers Left Alive
Such a cool, stylish, original and singular film…feel like it didn't get the love it deserved.

Jon: Whiplash
An exhilarating depiction of a triumph of the will.

No No Country for Old Men surprised me.