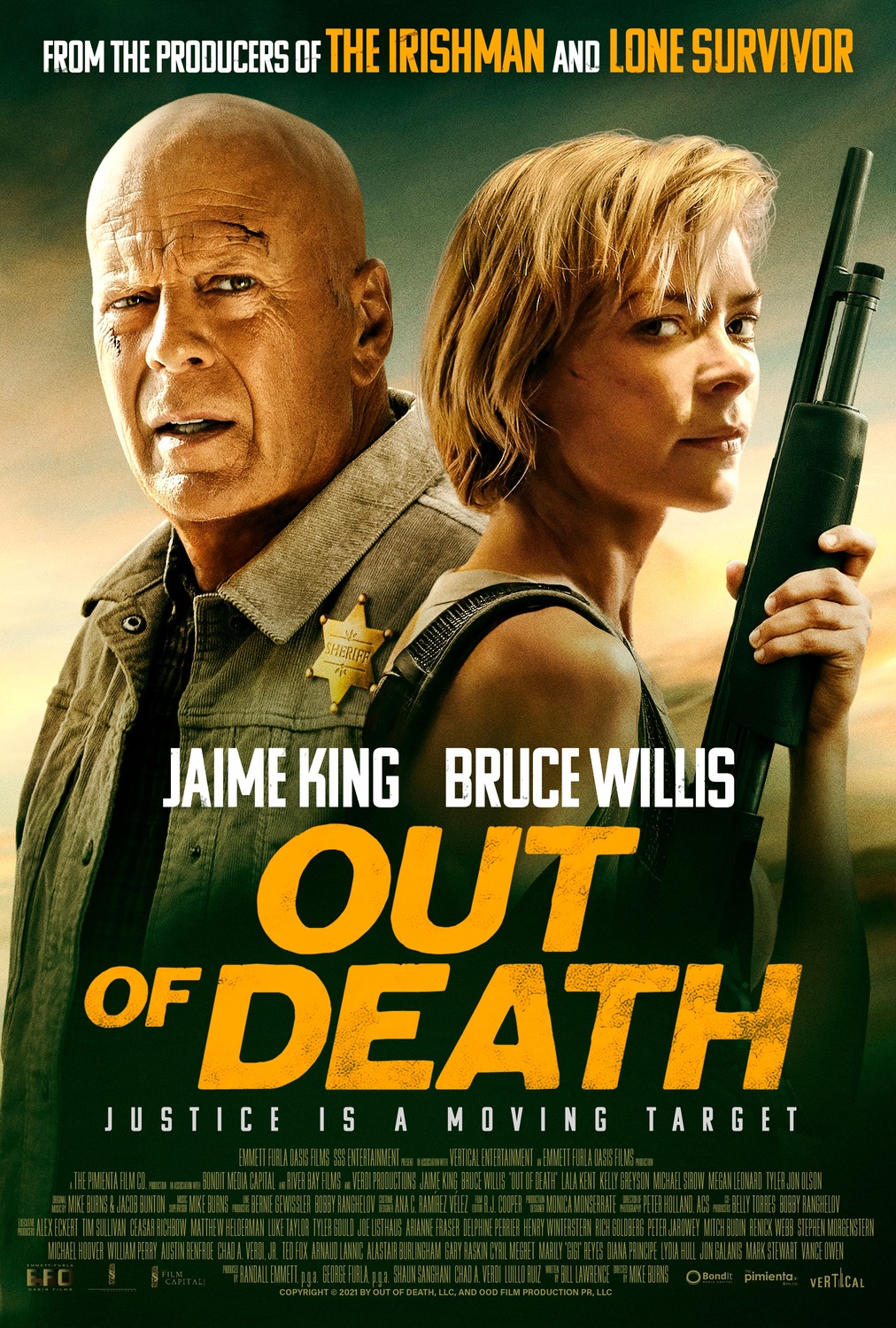 Missed opportunity not casting Steven Seagal to complete a Half Past Dead / Today You Die / Out of Death triptych.

Directed by Mike Burns, who composed the theme music for ESPN's Rome Is Burning?

Since 2011, Burns has supervised the music for 25 films, 16 of which feature Bruce Willis.

Is he associated with that producer I read about?

In October 2020, not long after wrapping his directorial debut, Emmett sent his longtime music supervisor, Mike Burns, to Puerto Rico to start shooting his own first movie, Out of Death, also starring Willis.

When the stars at last aligned and filming commenced, Burns was left with just nine days to shoot. Equally challenging: Willis, who was originally slated for two days of filming, had a "hard out," which meant that all his scenes would need to be shot in a single day. "We already had such limited time with Bruce, and our time with him was cut in half," Burns told me. "And that meant that we had to actually start cutting themes and rejiggering things."

There's a crude, blunt brilliance to Emmett's filmmaking formula: Accept money from just about anyone willing to hand it over, offer vast sums of it to an aging star for a day or two of work, then leverage that actor's name to pre-sell the movie in foreign markets. Along the way, forgo union writers and directors whenever possible, keep shooting days to a minimum, and film on location in places like Puerto Rico, where the local government offers filmmakers tax credits that can be sold on the open market for 90 cents on the dollar.

Ugliness, after all, is excusable in Hollywood. It remains the kind of town where even auteurs like Martin Scorsese will rub elbows with Emmett, as long as it helps them get a movie made.

"He begged Marty for a script that he couldn't get financed so that he could finance it for him," a producer who has worked with Emmett told me. That film turned out to be Silence, which had languished in development for decades before Emmett helped Scorsese find some of the money that finally got it made.

Emmett leveraged his deal with Scorsese to earn a non-PGA producer credit for The Irishman, but it did not earn him the respect of his peers. For those old enough to remember his early days in Hollywood, Emmett is still Mark Wahlberg's former personal assistant, the hard-partying hanger-on who helped inspire the character Turtle on HBO's Entourage.

From the inspiration for Turtle on Entourage: Out of Death.