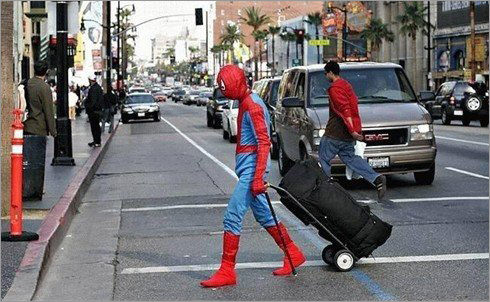 I have returned from Los Angeles, where I saw The Dark Knight four times.

I love how Gotham City is so blatantly Chicago.

At first, I thought the license plates on the cars were just Illinois plates, but the cursive "Illinois" actually reads "Gotham."

In the scene outside Gotham General after it explodes, you can see a CTA bus in the background with the "C" in the CTA's logo modified to be a "G."

When Joker asks Batman to hit him after the truck flip, you can see a store in the background named "Sweet Home Chicago."

I didn't realize until my fourth viewing that Gordon drives the armoured truck carrying Dent. I still don't understand how Batman sets up the SWAT rope trick.

The actor who plays Gordon's son should stick to emoting.

"Dad, is he all right?"
[flaccid, no more sympathy]

Whoever mixed the sound at the end should be fired. Music drowns out Batman and Gordon's stirring monologues.

Batman's costume was on display at the ArcLight. 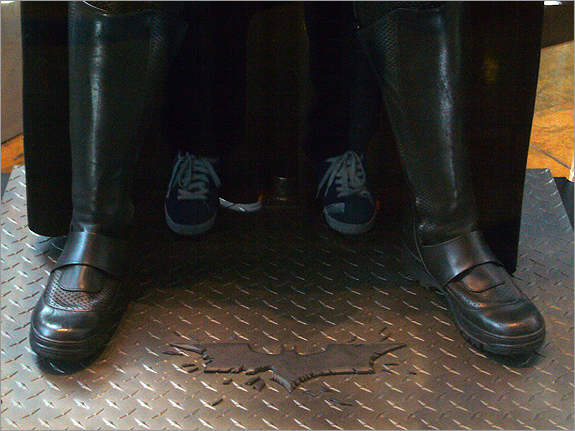 Whose shoes are more hideous: his or mine? 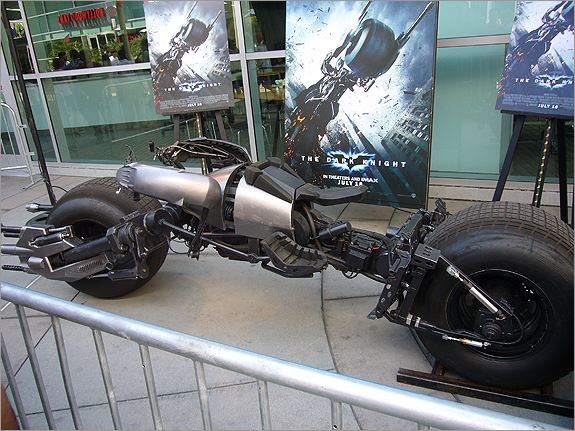 If characters on Night Court were Batman villains…

The actor who plays the mayor of Gotham City played Die Fladermaus "Batmanuel" on the live-action Tick series.

Joker didn't need to draw black rings around the mayor's eyes on his obit photo.

"Wanna know how I got these scars?" 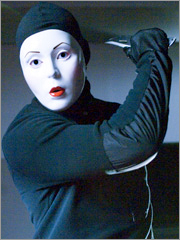 I expected Joker to say "I like that" like he does in the trailer, but Nolan used a different take in which Joker pronounces it as a dactyl. Annoyed me every time. Similarly, I prefer the burning Joker card in the trailer to the dull, flame-retardant one in the final cut.

Gordon's partner in the armoured truck urges him to head above ground without any urgency in his voice.

In the scene with the cash pyramid, Ledger channels Nicholson's Joker.

The actor who plays Lau speaks odd Mandarin, which puzzled me because it didn't sound like English was his first language, and if he couldn't speak Mandarin well, he could've spoken Cantonese, the de facto official spoken variety of Chinese in Hong Kong.

Turns out he's from Singapore, which explains both his odd Mandarin and his odd English.

I liked when the sonar died, though, and then…SONAR JOKER!

While pre-gaming for the 3:15 a.m. screening, we watched the end of Batman and Robin. Almost all of the dialogue is punny one-liners. Nolan has spoiled us.

Bruno also reminisced (to my surprise) about the Clock King, my favourite Batman villain, and one whom I relate to.

I pitched fast-forwarding and adapting The Dark Knight Returns — old Batman vs. old Joker and Superman.

I think The Fugitive with Batman in the Richard Kimble role could work.

The man who solved the "riddle" of Batman's identity in The Dark Knight was named Mr. Reese.

I bet we just saw the set-up for the Riddler in this movie. I imagine him to be one of the villains in the next movies. He's already figured out who Batman is, and now he's going to have all of Gotham hunting him down, since all of Gotham knows he knows who Batman is.

Also: I would put my money on Bane as a central villain. Maybe with someone like Javier Bardem to fill the role, we won't get the mindless muscleman the character is often misinterpreted as. We'll get the criminal mastermind who broke batman's back. [source]

Anton Chigurh is a cross between Joker and Two-Face. 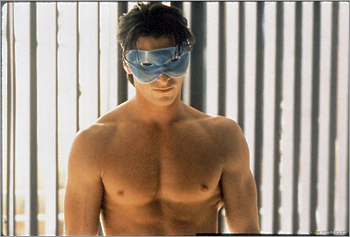 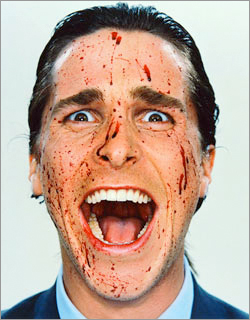 Bateman vs. Joker — I wish.