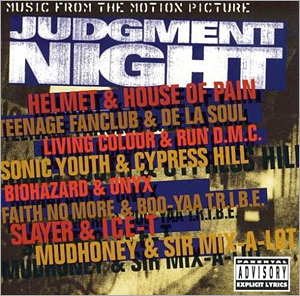 In retrospect, the soundtrack for Judgment Night is kind of unbelievable.

What about a soundtrack pairing hip-hop and indie rock artists a la The Hood Internet? Flo Rida and Sufjan Stevens collaborate on a song. Are you not intrigued?

This generation deserves its own Judgment Night soundtrack.

I know what my band (The Blond Jews) would perform if we were participating:

My second choice would be the soundtrack for Kids in the Hall: Brain Candy.