Topher Grace's heel turn surprised me, even though I posted that his "unassuming facade masks a dangerous serial killer." Don't do drugs, kids.

The Little Richard song at the end is delightfully incongruous. 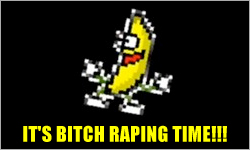 I read an interview with Walton Goggins beforehand in which he notes that his character says "Die, you space faggot." That line doesn't register clearly, however, and my disappointment with his delivery/the sound mixing tempered my enjoyment of the subsequent spine-ripping.

The man who introduced the screening noted that 10-12 people walked out of an earlier screening. I didn't see anyone walk out, but I was sitting in the first 10 rows.

After the screening, someone asked me how A Serbian Film compares to [New French Extreme film célèbre] Martyrs. The violence, gore and misogyny are comparable, but I think Martyrs is more fucked up because it's played straight. A Serbian Film's irreverent nature tempers the horror of what you see. No one laughed or cheered during my screening of Martyrs.

Martyrs is bleak; A Serbian Film is bonkers.

"Asphyxiation – I like it! How else can a boner kill people?"

• Cosplay Girls Before And After Photoshop
• Inside a Real Doll factory