I have now seen it seven times. Fuck James Holmes.

3. Bane and Pavel rise out of the fuselage [which a dome IMAX screen enhances visually]

Blake: When you and Dent cleaned up the streets, you cleaned 'em good. [cleaned 'em well]

I before E except after C…..and H.

Kyle: You don't count so good, huh? [count so well]

4. Gordon: Now there's evil rising where we tried to bury it

Clean energy? [groan] It's like tariffs in The Phantom Menace, or a COO character on WWE programming.

5. Alfred: Sometimes a man rises from the darkness

This is a puny stock exchange for a city with six suspension bridges. 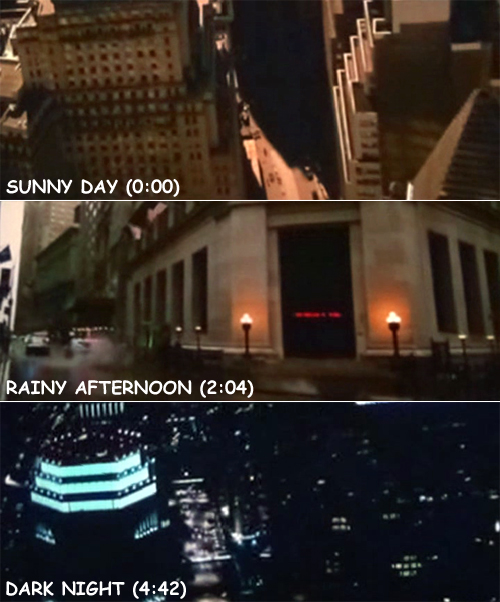 Evidently, Gotham City has the same day-night cycle as Hyrule.

The American stock market closes at 4:00 PM EST. Even without daylight saving time, Batman would not be pursuing Bane and his crew at night.

Could Bane have crashed the stock exchange during after-hours trading?

Kyle: Where is it?
Daggett: The clean slate? The ultimate tool for a master thief with a record, where you type in someone's name and date of birth, and in a few minutes they're gone from every database on Earth?

Answer in the form of Wikipedia.

"Where is it?"
"Clean Slate? The 1994 American comedy film directed by Mick Jackson, starring Dana Carvey as a private investigator who is the key witness in a murder case?"

"What is it?"
"Tabula rasa? The epistemological theory that individuals are born without built-in mental content, and that their knowledge comes from experience and perception?"

Aircraft of the summer: The Helicarrier, Prometheus, or The Bat?

A running gag on Jimmy Kimmel Live! is [was?] running out of time and bumping Matt Damon. That's how Christopher Nolan treats Michael Caine.

The board meeting is in 35 minutes, yet Bruce has time to show Miranda the reactor beforehand.

Client: I've paid you a small fortune.
Designer: And this gives you power over me?

Blake: That looks like motor oil right next to it. [odd thinking out loud]

Might want to tarp off the upper deck of your stadium, Gotham Rogues.

Blake: There's a ring around the tunnels! They're gonna blow it and trap the cops underground!
Foley: Pull 'em out. PULL 'EM OUT NOW!

30 seconds later, you see cops jogging through the tunnels.

I wonder how this American national anthem and American football game plays internationally.

I like how the Rapid City players continue to try to tackle Hines Ward while the field is collapsing.

At least Ward is running away, however obliviously.

What happened to the drawbridges in Batman Begins?

How does this pit in India receive American television reception?

Where are Gotham's firefighters?

10.
Bruce: What does that mean?
Prisoner: Rise.

11. Bruce rises out of the pit [which a dome IMAX screen enhances visually]

No one discovers the hidden Bat-craft?

"Hey, it's Batman. We can forget that we're standing precariously on a frozen river now. In fact, throw a lit flare onto the ice."

Wear a mask to protect people you care about – we get it.

13. Cops rise from under ground

14. Talia rises out of the pit

This is awe-some. Clap clap clap-clap-clap.

The number of evacuees on the Queensboro Bridge appears to fluctuate.

Batman has a no guns policy, but he seemingly shoots and kills the driver of the truck carrying the bomb. Collateral damage?

I don't like how Talia dies. It's like someone yanked her power cord out of a socket.

Catwoman: I love you.
Batman: I know.

15. The bomb rises into the air

This ending is the same as The Avengers'.